Offering the milk. Pen and ink drawing, coloured in Photoshop.

Calling a digital painting finished is quite a difficult thing, at least for me. Knowing that colours and the lettering could be changed  I am looking at the panel, asking myself  “are these the proper words? the proper font? The proper font-size, does the colour combination work?”

On the other hand, there is so much to do yet. I have the next scene in mind, where the robbers are attacking the village, stealing the little what the village posesses. I want to paint an atmosphere of brutality on one side, and helplessness on the other, seen through the eyes of the cats. Maybe there has to be shown some action – that’s why I am doing sketches of fighting men. On the other hand – eyes wide open in fear say something about feeling helpless as well, and I wonder whether the drawing of a clenched fist may convey brutality also. I’ve seen some of Hitchcock’s films, and often he doesn’t show brutality and violence to a full extent. Nevertheless we see and feel it.

So there are some decisions to make. That’s the disadvantage when you have the freedom of illustrating your own story! 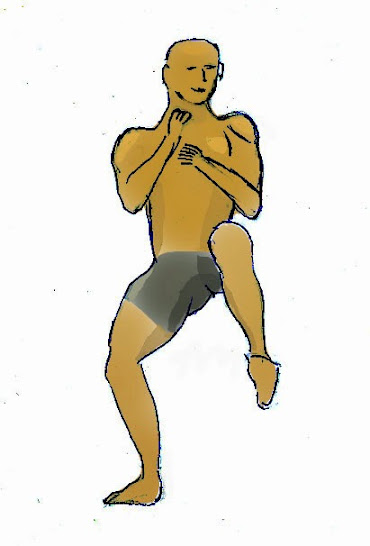 The Fighter. Pen and ink sketch, coloured with photoshop. April 2014

Just now I am practising sketches of humans in various fighting poses. I use www.posemaniacs.com as a resource. I plan to use some of these sketches later in one or two of my illustrated cat story. I am also practising colouring with the lasso tool.

I confined myself to 35 minutes for sketching and colouring, and I know that the shadows and highlights are not complete, and the drawing lacks accuracy. But I wanted to get the gesture, the pose.

Offering a bowl of milk

A human offering a bowl of milk to the cats.

As you can see, there’s a lot missing yet: Some colours have to be filled in (the rest of the wall, the sky), the lettering has to be done, and the human and the street lack shading. I am not quite sure about the colour contrast yet – the street may have to be much darker. In order to decide that, however, the wall has to be finished.

This scene has its place at the beginning of the story, after the cats have come to the village in order to hunt mice and rats. They haven’t met any humans yet. One day, one person overcomes her fear and goes out in the street with a bowl of milk, offering it as a sign of good will and friendship.

Cat on the Prowl – finished

Cat on the prowl. Pen and ink drawing, coloured in photoshop. April 2014

The wild cats had already been to the village and discovered that it was full of mice and rats. They hadn’t met any humans, everything had been quiet. The hunt had been easy, and so they decided to come back again. They are more confident now,

I did the drawing with a staedtler pigment pen on drawing cardboard, scanned it into photoshop and coloured it with photoshop. The tools I used were the lasso tool and the dodge and burn tools. The colouring took its time; not only because I am still learning how to use the tools, but also because I am experimenting with colours, hues and shades.

Knowing where to go

I haven’t done anything in Gimp yet, but I have been using Inkscape, and just now I am putting together my first illustrated story with Scribus. When I drew the first cat cartoons I only had a vague story in mind. However with each cat cartoon I drew and coloured the story became clearer and clearer. Unfortunatly the first illustration I had was one which had to be inserted at the end of the story. It seemed that I worked from end to front.

It seemed that it was time to put them together in the right order, and the tool for that is Scribus. You can easily insert pages, you can insert images, move them around, change their size, write paragraphs around them.

I must admit, that all that hasn’t been a planned process. I’ve watched a lot of videos about graphic novels in the meantime, and all of them tell you to write down the story first, then do the thumbnails and then do the drawing and colouring. I very much did the opposite: I began with a detailed drawing and illustration of something which now is the final scene. I had only a vague idea of the story. I had no thumbnails. I’ve got a mixture of hand-lettering and lettering done in photoshop. I’ve got a mixture of colouring with pencils and markers and digital colouring. I got a written story, and inserted in it, illustrations with captions. Seen from a professional view I severely failed.

BUT: I had and I am still having a lot of fun. A long time ago I had fun telling little stories. Then a time came when I had fun drawing, painting and colouring. Now, it seems that I’ve found a way to combine the two things I like to do – storytelling and painting/drawing/colouring. There’s always time to learn and get better – once you know where you want to go. Now I know.

Cat on the prowl

Cat on the prowl. Pen and ink lineart, coloured with photoshop. April 2014

Thanks to some very useful videos on YouTube I discovered the secret of colouring with the lasso tool in photoshop.  You can use it first to lay down flat colour by just filling in the selected area or to use a big brush. After such a long period of painting in a traditional way with coloured pencils, markers and acrylics it is fun to go back to photoshop!

It seems that I am doing this cat cartoon from back to front. Once again the story: Once upon a time there was a little village up there in the mountains. Outside the village a pack of cats lived – wild, fierce creatures. One day they came into the village, hunting for rats (really big ones!) and mice. Above is the illustration for that scene. The humans first were afraid of them, but when they learnt that the cats did away with the rats and mice, they welcomed them.

Once every month wild men came into the village, everyone with a sword, and forced the villagers to hand over the little what they had. The village people were desperate and thought about leaving their homes. The cats witnessed the attacks from behind the bushes and one night they decided to hold a council in order to talk about ways of helping their human friends. See this illustration: and that one:

They put up guardian cats on the hill in front of the village (see this illustration) and every time the robbers approached the village, the cat pack attacked them with claws and teeth. In the end they decided to go somewhere else…

That is the story. It is now much clearer than in the beginning. The illustrations also changed – in the beginning there was only an llustration and a story. Now it got more and more cartoony, inked with a staedtler fine liner, scanned into photoshop and coloured in photoshop so far.

Another of these quick cat sketches (I hope you don’t get bored with them!), done with a Staedtler pigment liner. I then scanned the sketch and decided to colour the eyes in photoshop. But once I was colouring the eyes I decided to try to colour the whole sketch in photoshop. This was something I haven’t done for ages, and I must say, I enjoyed it very much!

Cat on the Hunt

Another quick sketch which might serve as a reference for my cat cartoon / illustrated story. Just now I am collecting various poses and cat gestures and practising quick ink sketches.

Sketch of a cat eating out of the bowl

This is a preparatory sketch for the next panel of my illustrated cat story. The scene will show how the cats are fed by their human friends, thus showing the tight connection between them and the people in the village.

It is not done with a pencils, so there’s no way to erase wrong lines. It is one of my art goals to get better in drawing. I’ve loads of scrap paper, so when I’ve got the feeling that the drawing has gone wrong I just throw it into the trash can and begin anew.