The shades of purple

I’ve done quite a lot of “traditional” drawings in the last days and weeks, and I decided to change over to the digital way of creating art in order to play with colours and shapes in Inkscape.

I’ve got the impression that purple and the various shades of purple are one of my favorite colours. I like the energy and power which emerges from purple.

Fantasy landscape with pen and ink

The story of this drawing is quite a funny one. One evening I sat down at the table in my living room and began to draw. I had been watching a film on tv with commercials, and I was bored with watching the commercials. So I took out one of my fine liners from Staedtler and began to draw a building. I had no special building in mind – I just wanted to practise creating differing shades by hatching. Then the film continued and I stopped drawing.

The next morning I looked at what I had drawn, with my tea mug in one hand. The drawing was kind of calling me to continue – which I did. But I had to leave for work, so there was another break. However when I returned from work I worked on it again, adding the landscape.

I think it took me three days to get it into a state which I could call “finished”. Now, that I am looking at it again, I think it could need some additional strokes here and there – but it is as it is…

I did this drawing in two steps. At first I did a line drawing of my right hand, using an Artist Brush pen. This I did quite some time ago (three weeks or so), and then left the drawing alone. But three days ago I picked it up again and tried to applied what I’ve learnt so far about shading watching the tutorials on “Drawing tutorials Online”. I used a so called “fine liner pen”. Actually it was not so easy to have my right hand in the way I’d drawn it with the brush pen and doing the shading with the left hand. I am a leftie with drawing, that wasn’t the problem, but not to move my right hand was a real challenge!

I did this person without any reference at all. I had someone in my mind who is listening to some music and almost beginning to dance. It was done very quickly, and I didn’t work on the scan in photoshop – I only scaled it down to the proper size.

I admit that this is a very rough sketch. I did it with my Artist brush pen, without any pencil drawing. I made the first with my right hand and drew with my left hand. I try to practise the drawing of hands regularly, and I think this was done sitting at my breakfast table, early in the morning. The only thing is that while drawing I tend to forget the time, and run the risk to get off to work too late. Well…

Yesterday evening I had a second go at landscape drawing. I think it is a quite different one to the first. I not only used another medium (pen and ink this time), I also did not try to copy the photography. I’ve got the impression that a beautiful photo not necessarily makes a beautiful drawing. So I took the liberty to make changes where I thought they should be.

These vector horses are based on a ballpoint drawing which I did in 2010. I vectorised the drawing with the pen tool in Inkscape, and then used the stamp function to produce copies of the vector piece.

So traditional art and digital art are again combined in this piece. Whereas the drawing shows the muscles of the horse and thus is a quite realistic presentation of the horse, the vector piece shows three stylized horses with the focus on graceful movement. 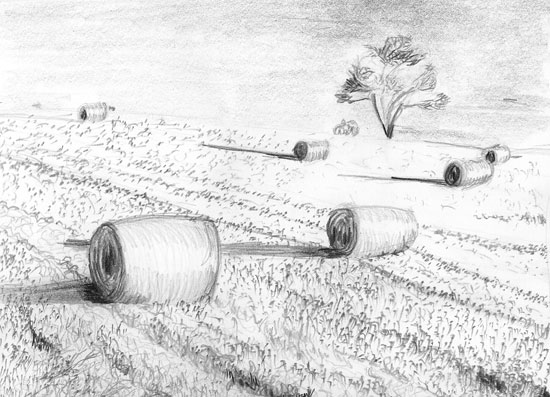 Last Tuesday, in my Drawing class, we had to draw landscapes. I say “we had to draw” because landscape has not been my favorite drawing subject. Animals – yes. People – okay. But landscapes?

But it turned out better than I had thought. I spent a very long time working on the stubbles in the foreground – it was a kind of zen-like activity knocking those stubbles onto the paper.

And in the end I learnt that it really is important to leave your comfort zone and try out new things!

How I use Google+ for Marketing

I’ve got a shop on Zazzle, and I am a member of Google+. I am also on Twitter, and on Facebook, and have been using those two for marketing too.

At the beginning of November I discovered the website Drawing Tutorials Online. At first I was a bit reluctant to register, but then I decided to allow myself to have a one year subscription for the price of about 100 Euros and registered. Everything went smoothly, and on the same day I browsed through the site. There’s a ton of useful video tutorials on the site, and a lot of very helpful pdfs. In addition to that there is a critique gallery where you can upload your pieces to, and some days later you have them criticized by Matt Archambault, the owner of the site.

It is a bit like going to art school and I am learning new things everyday. The horse above is based on a photo of one of the horse sculptures of Degas. I think something with the neck and the head is not right, but I don’t know exactly what. I uploaded it to the Critique gallery as well, and now I am waiting for Matthew’s critique.