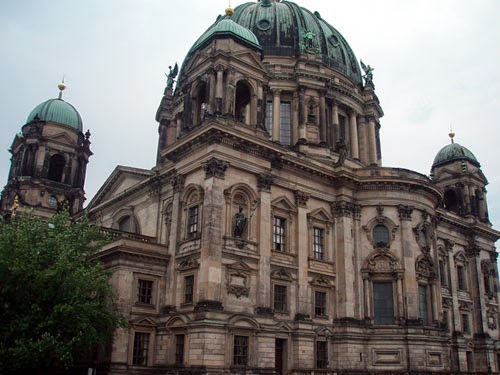 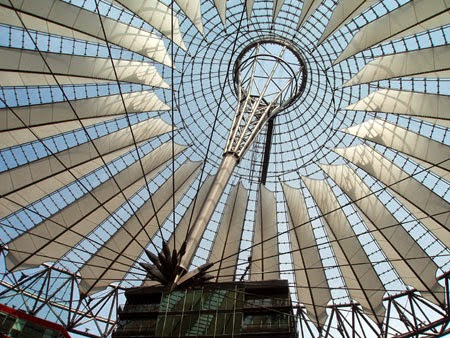 Belvedere on the Pfingstberg near Potsdam. Photo: Ulla Hennig, September 2011

The Belvedere is a small palace on the Pfingstberg in Potsdam, the capital of the federal state of Brandenburg. It was built between 1847 and 1863. After WW II it fell into disrepair. Between 1988 and 2005 it was repaired by a group of local residents and is now open to tourists again.

Over the Roofs of Biberach

Biberach – the town where I was born – was founded in the 13th century. Many old houses are still standing, and you can see from the photo, how narrow the distances between the houses are. As many of the old houses were built in a half-timbered style fire was a big danger. Once a fire had broken out in one house it easily moved over to the next ones, and soon big parts of the town were on fire.

Between the houses you can see the church tower of St. Martin. St. Martin has been and still is used by Catholics and Protestants alike. In former times Catholics and Protestants had their own mayors, and people from either side would not marry people from the other denomination. Catholic people had “catholic shops” to go to, as well as Protestants had their “protestant shops”. These times are over now – and I am very glad about it!

Those half-timbered houses are can be found all across Germany. Actually there exists a German Half-Timbered House Road, which is more than 2000 km long and stretches the Lower Saxony, Saxony-Anhalt, Hesse, Thuringia, Bavaria and Baden-Württemberg (Baden-Württemberg is the state I was born and raised, went to school and to university, before I moved to Berlin in 1981).

This is one of the few houses left in the southern part of the Friedrichstrape. You can actually read who’s built this house. Below the balcony is written: A. Gutschow
This house must have been built sometime in the end of the 19th century.

A painted Door in Stralsund

Stralsund is a city in Mecklenburg-Vorpommern, Germany, situated at the southern coast of the Strelasund (a sound of the Baltic Sea separating the island of Rügen from the mainland).

I went there on the second day of my one week vacation together with my cousin Ingrid and my other cousin Dirk who lives near Stralsund with his family. You can find many painted doors as the one in the photo above in the region around Stralsund. You can find them in urban buildings as well as in cottages in the countryside.

One of the most famous buildings of Berlin

Once a week I go through the photos on my hard disk and select a new one to upload on my Zazzle account. This time I was looking for photos of buildings.

I uploaded a photo of the Deutscher Dom on the Gendarmenmarkt in Berlin and created a postcard out of it. Here it is:

Deutscher Dom, Berlin by ullahennig
Browse other Berlin Cards
It doesn’t look very much like Berlin, does it? Could be a dome somewhere in Italy. In fact you have to go to the Gendarmenmarkt on a nice Summer’s day and you will get the impression on standing on some Italian Piazza. There are some really nice cafés on the corners of the Gendarmenmarkt, and on Summer days every chair outside is occupied.
Of course, most of the people there are tourists, but Berlin people as well enjoy the easy atmosphere.
January 13, 2010

Hohensalzburg Castle is towering over the city of Salzburg. Me and my cousin had the pleasure of a New Year’s Eve concert and a five course dinner. Both events took place in different halls of this building (first the concert and then the dinner!).

After the dinner at about 11.30 pm we went outside to watch the fireworks. We were offered one glas of sparkling wine which we held in our gloved hands. Of course there are always people who can’t wait till midnight proper, as we could see and hear. But then the big count-down began, and then the most beautiful fireworks I’ve ever seen in my life began and lasted for about 20 minutes. (My cousin took some pictures with her digital camera, and maybe in the next weeks or so I will be able to show them to you!)

This castle has never been stormed – it was however given over to the napoleonic troops in order to prevent damage to the city.

What a great place to spend New Year’s Eve in!